Le Professeur Gothique's theme this month is India! Yay! I love Indian things, especially silver Indian jewelry. I love bracelets with little bells and bindis! I always have a stock of incense (my favourite is currently Tree of Life) and I have a large Kali wall hanging. 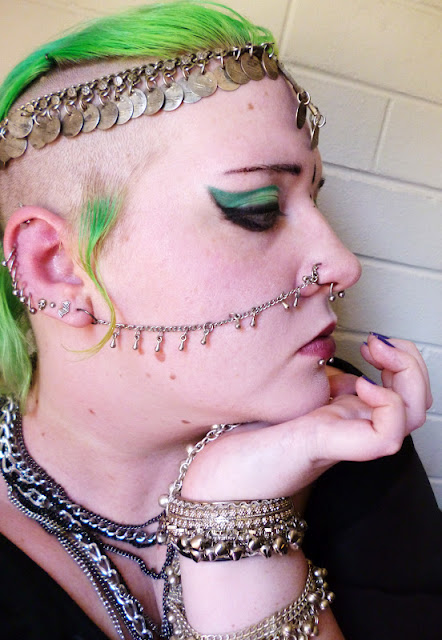 I got this nose chain while in Leicester, it was originally a bracelet. I usually have a sleeper in my nose, so I can connect my chain, but I've recently had the other side of my nose pierced and my piercer wanted the jewelery to look the same. She changed them to closed rings, so I can't wear nose chains until she gets some special jewelry in for me. I just kind of poked the chain through my ring, because I want only taking photos and not dancing :)
I'm wearing two bracelets. One is actually an anklet, but I have fat ankles :(
The only thing I hate about little bells is that they get caught while dancing and I arrive home from the club with less bells than I started out with. 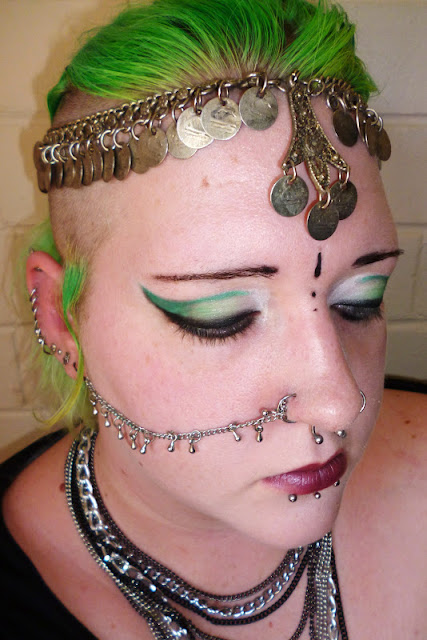 I don't think my head thing is very Indian, I bought it in Manchester. I've never actually worn it anywhere because I don't know if it's a necklace or something else! 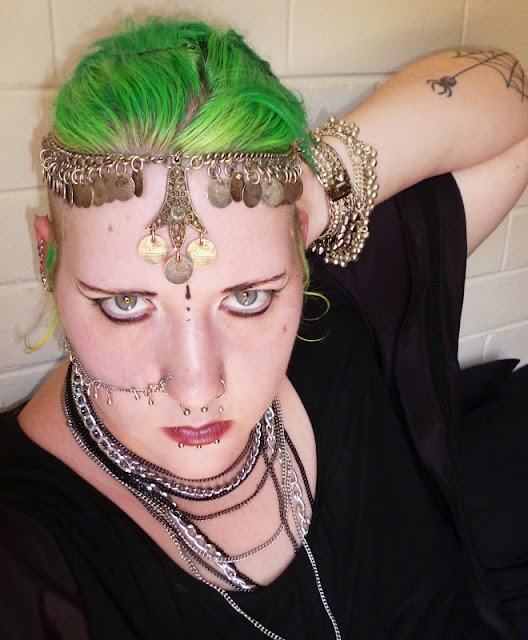 Channeling Theda Bara.
Now for a short little history about the nose piercing. Nose piercing was brought to India from the Middle East in the 16th century. It is thought that the nose is related to the female reproductive organs and getting it pierced would make you more fertile and childbirth more easy (in that case, watch out future boyfriend!).
The thing I love best about Indian jewelry is the nose chains, which are worn primarily at weddings. The Indian nose ring is called a Nath. Chains connect the Nath to the hair. 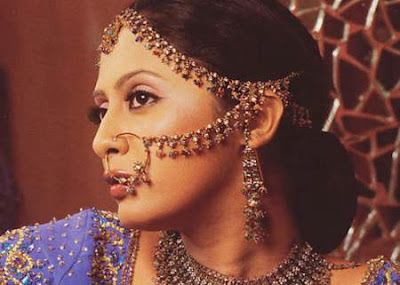 I'd love to get a Nath with chain, but it's hard to find in silver!﻿
Posted by Natalie at 2:40 PM

You look so beautifully exotic. I wish I'd done green like that on my eyes; I wore a green outfit for the theme.
I SO should start making nose chains! Goths would love them; and I'd wear them if I knew they were pull-safe (so I will make my own and make them that way!)

Natalie, you look FABULOUS! EXOTIC! GORGEOUS! OMG!!! And wear that "head thing!" It looks awesome like that regardless of what its original intent!

Exotic, indeed! I love how you did your makeup for this theme. It really suits your amazing collection of metal danglies. :)

Lovely!!!!! :) I love your nose chain and everything else too!

Great look. I'm Indian and have been into goth music, literature, aesthetics for 10+ years. Your jewelry captured both the goth and Indian aesthetic beautifully! www.gothelegance.blogspot.com